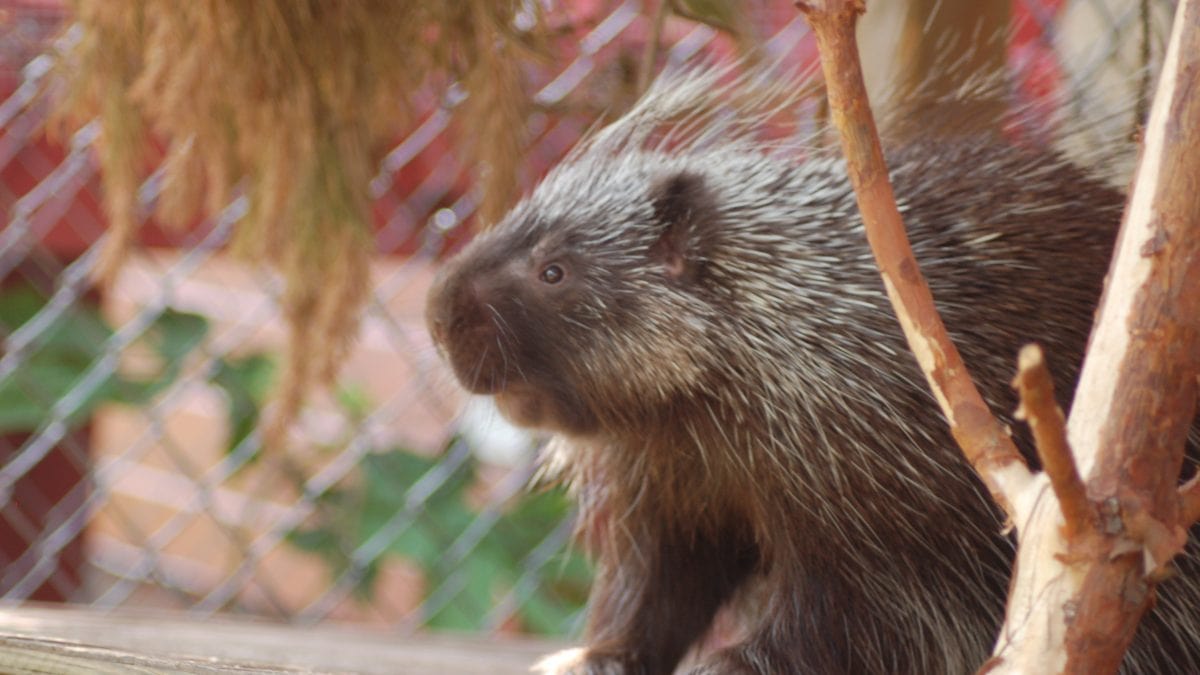 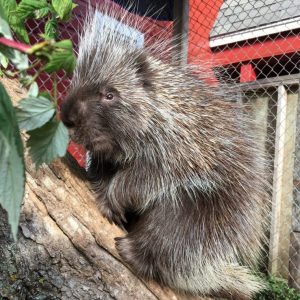 History: A concerned citizen found Spike and thought he was injured in a logging incident. They then raised Spike for about a year, causing Spike to become habituated. He came to Osprey Wilds in November of 2011.

Identifying Characteristics:The North American Porcupine is a large, tree-climbing rodent and is the second-largest rodent in North America after the Beaver. North American Porcupines have black to brownish-yellow fur, round bodies, large snout and small ears. They have a stocky tail, short legs and feet with hairless soles and long nails that help them climb trees. The most recognizable feature of the porcupine is its quills. A porcupine may have 30,000 quills or more all over its body except for the stomach, face, and soles of its feet. Quills are made out of keratin, they are modified hairs with barbed tips. An adult porcupine averages 10 – 35 pounds and is approximately 25 – 36 inches long.

Range:The North American Porcupine is found throughout Canada, western United States and northern Mexico. They can also be found in some midwest states of the US and some northeast states.

Habitat/Denning: Porcupines prefer forests with both hardwood and softwood trees, they live in coniferous, deciduous and mixed forests. Porcupines find crevices in rocks, ground dens, or hollowed out trees to den in. Their home range can vary in size depending on access to resources and the time of the year.

Predation: Some predators to the porcupine are lynx, wolves, coyotes, and mountain lions. The Fisher, part of the weasel family, is a predator that can take down a porcupine without getting quilled. Fishers are patient hunters that specialize in hunting porcupines; they circle around the porcupine and attack the face. They continue striking until the porcupine loses too much blood and passes out. The Fisher will then turn the porcupine over and eat it through the stomach.

Feeding Habits: The North American Porcupine is a herbivore, they eat a wide variety of plant materials. Spring and summer diet consists of grasses, buds, twigs, roots, leaves, flowers, seeds and an assortment of other vegetation. Their winter diet consists primarily of the inner bark of trees and conifer needles. They will also gnaw on bones and antlers found on the ground throughout the year because it helps keep their teeth short and is a good source of protein and calcium. The porcupine’s diet lacks sodium which attracts them to roadways where salt residue is leftover from winter road maintenance. This leads to high roadkill mortalities.

Breeding: Once a year North American Porcupines mate in October or November depending on their location. Female porcupines become sexually mature within 12-25 months of age and are only fertile for 8 to 12 hours. The males are sexually mature within 24-29 months of age. Females will start attracting males to their territory by vocalizing, using vaginal secretion and urine marking days before copulation. Males compete with one another, either on the ground or in a tree. The battles can result in injuries and fatality. Courtship consists of chases, vocalizations and urine showers. When a female is ready she holds her quills flat against her body, elevates her rear and lifts her tail over her back. Mating continues over several hours until a vaginal plug is formed.

Seven months after mating the female gives birth to a single baby, a porcupette. Porcupettes weigh about 1 pound. Young are born with eyes open, teeth erupted, mobile and capable of following the female. Their bodies are covered with long hairs and quills, which are fully functional after drying within a few hours. Porcupettes become independent of their mothers after about 5 months.

Porcupines cannot shoot their quills. When a predator approaches, the porcupine will turn its back, raise the quills and lash out at the threat with its tail. If the porcupine hits an animal with its quills, the quills detach and become embedded in the animal. The predator may die if it is hit in a vital organ or if they are unable to eat because they have a mouthful of quills.

A porcupine’s quills are not it’s first line of defense. To help it avoid battles it warns predators not to attack it by sending out a pungent odor. The odor is made on a patch of skin on the lower back called the rosette.

Porcupines have a very wide variety of calls. They have moans, whines and grunts, teeth-chattering.